Good morning!  Our week visiting the North Shore Scenic Drive in Minnesota, a few years ago, was so much fun!  I have enjoyed sharing the first few days with you:  our drive up and exploring Two Harbors and also Gooseberry Falls and Split Rock Lighthouse State Parks.  Even though I didn’t have much time to research our last minute trip, I was able to get suggestions from a co-worker and find some great information online.

I love finding cute offbeat roadside statues and attractions when we travel.  We have seen ‘Pinky the Elephant’ in Marquette, Iowa, the Wall Drug Dinosaur in South Dakota and  a statue of Warrior King Jesus in Minnesota, among others.

Not all of them are quirky statues; I like the Grotto of Redemption in West Bend, Iowa and Fenelon Elevator in Dubuque too.  It is just fun to find the smaller, unusual tourist attractions that make an area special.

This trip I wanted to find 3 and they were not even out of the way!  On Tuesday, we found 2 of them while heading to the new campground.  We were able to drive by and see the statue of Pierre the Pantless Voyageur in Two Harbors.  He is at a restaurant/motel on Highway 61 and he does indeed look pantless.  No one would get out and take a picture with me though.

At Silver Bay, we saw huge piles of ore and a statue of Rocky Taconite.  He is not right on Highway 61, like Pierre, so he was a little harder to find, but the city was easy to drive around in, even with the 5th wheel.  Rocky was not huge, but he was so cute.  He reminded the husband of watching the Rollie Pollie Ollie cartoon with the kids when they were younger.  Taconite is a low grade iron ore that is mined in the area.  In fact, Rocky is standing on a big boulder of taconite.

Tettegouche State Park was also easy to navigate with the 5th wheel.  We really just needed a place to have lunch, because we were early for check-in time at Lamb’s Resort.  We had lunch in the camper in the parking lot.  The parking lot was big and easy to drive though.  The youngest and I even walked down to a close beach (maybe to look for rocks, but we won’t tell the husband that).  We ended up coming back to Tettegouche 2 more times.

Wednesday, we drove through the campground without the 5th wheel.  Some of us accidentally?  went on a trail, which ended at this nice beach.  Families were wading and picnicking.  Since the rest of the family was waiting in the parking lot and we didn’t expect the trail to be long, we didn’t stay to explore the beach.

After we finished lunch on Tuesday, we were still plenty early for check in time, but we didn’t want to drive around with the camper.  Luckily, we called Lamb’s, they said our spot was open and to come on up.  It was so nice that we could arrive early.  Lamb’s Resort and Campground is a nice family friendly place, with two private beaches, rv and tent spots and also cabin rentals.  Check in was very pleasant and easy, they gave us a map of the campground and highlighted the way to our spot.

Once done setting up, we pried the kids from the small arcade and explored a few nearby parks.  Temperance River State Park and Cross River waterfall are very close to Lamb’s Resort.  We also went down to Father  Baraga’s Cross at the mouth of Cross River.  The granite Cross marks the place where, in 1846, Father Baraga and his Indian guide were blown to safety during a terrible storm.  The two had heard of a possible epidemic among the Ojibwe in Grand Portage and were on their way when the storm hit.  The granite Cross is where they had erected a small wooden Cross in gratitude.

The town of Schroeder also has a nice area museum and the Schroeder Baking Company, within walking distance of the campground, just up the hill.  This made it very easy to walk up in the morning and get fresh donuts.  I think we walked up every morning.  They were good donuts.  We also enjoyed pizza and malts one night.  The staff was very friendly.

Wednesday, after donuts, we drove up to Palisade Head.  This is definitely not a place to take the camper. The road up to Palisade Head is steep and narrow.  It is a sheer cliff 300 feet above Lake Superior.  There are great views, but no railings, so be very careful with children.  We saw ore ships out on the lake and a father and son picking wild blueberries.  A rappelling group was just getting ready as we left. 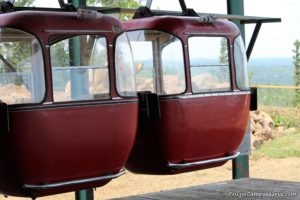 For something a little different, we stopped at Lutsen Mountains and took the Summit Express gondola ride.  We rode in a 4 person gondola to the top of Moose Mountain, 1,000 feet above Lake Superior.  There was construction when we were there, so the gondolas could be different now.  It was a nice ride and view and there was a chalet at the top.

By the time we reached Cascade State Park, later in the day, we had been on vacation for 4 days.  That is a lot of museums, trails and walking; but I wanted to see some of the waterfalls at Cascade State Park.  I stopped at the Ranger Station and asked if there were any ‘easy to get to’ waterfalls to give the husband’s bad knee a rest.  The Ranger was so nice, she showed us an easy path to use, told us about a nearby roadside park that was a very short walk to the shore and even thanked us for supporting the state parks by buying the Park Pass.  Cascade had the middle ones favorite waterfalls, because the water is the color of root beer.  Very strange.

The roadside park had huge crashing waves when we stopped.  Later that night, looking for rocks at the beach, the waves were still strong.  It was fun though, looking for rocks in the edge of the water and trying to grab one before the waves came in.  Sometimes, if you missed, the pretty rock was gone when the wave went back out.  The water was cold, and I was surprised that a few boys were jumping into the lake.  Our youngest almost lost a shoe to the lake, but he chased it down as it started to float away.

We have enjoyed our follow-the-leader vacation so far, we hope you follow along on our final day exploring.  We will be heading up to the Canadian border, more waterfalls and more rock hunting.