Good morning!  I’m so glad the last few campfire recipe experiments, that I’ve shared, were successful recipes!  The pie iron planned leftover meal is a new favorite, the cast iron potatoes and bacon was so easy and non-messy, even the campfire popcorn that caught on fire had a cast iron pan variation that worked great.  Unfortunately, my latest recipe experiment was not so successful.  The family would say it was a food flop, actually, they said ‘ick!’

I think I could change it to make it better, but they don’t even want to try it again.

The latest recipe experiment, a spaghetti pie iron sandwich, was repeatedly recommended by a friend who is a scout leader.  I thought it sounded horrible!  But he kept saying ‘just try it, just try it.’

So, last time we went camping, I checked the food in the refrigerator like always.  Sometimes there are leftovers that need to go in the freezer before we leave, or they would spoil.  This weekend it was leftover spaghetti.

‘Ooooh, I could finally try the spaghetti sandwich!’

There was only a small amount of sauce and noodles leftover, enough for 1 or 2 sandwiches to sample as an experiment.  Not enough to count as a meal, but a perfect amount for a snack.  I’m sooo glad I didn’t depend on it for a meal- we would have been hungry (or we would have had hot dogs on the fire).  I try to take something easy and quick, like sandwiches or hot dogs, when camping so we can have meal options.  This is very handy when I plan a campfire meal and it hails, or my new recipe fails.

The spaghetti sandwiches started out fine.  There really isn’t a recipe, since there are so few ingredients.

2 slice of bread, for each sandwich

Spread butter on one side of bread.  Place in the pie iron, butter side out, so they don’t stick.  Place sauce and noodles on bread.  I used about 1/3 cup, you want the sandwich full so the bread has good contact with the pie irons and browns.  But not so full it won’t shut easily.

Then cook on both sides over the fire until golden brown and toasty.  Cooking time depends on heat of the fire and how hungry or patient you are.  Sometimes, I set them over the coals and other times, I will set them right in the flames.

This is of course why all the pie irons I buy now are cast iron.  I have a few garage sale aluminum ones that still work well, but I have ruined all the Teflon ones.  I really like the durability of the cast iron ones, they may be a bit heavy, but we rest them on the grill grate or edge of the fire pit.

We made the spaghetti sandwich in the round pie iron; the youngest said it was smaller than the square one, so less to eat.  I don’t think he was too excited about the new sandwich.

The sandwich looked so pretty after we cooked it, all golden and toasty.  That should have been a dead give-away.  Years ago, after a few horrible new meals at home, I was told not to pick recipes because they ‘look pretty’.  Though it is fun to tease the family now, when I try a new recipe ‘it just looked soo pretty-I had to try it!’

It looked pretty, until we tried it.  Maybe more sauce would have helped.  Or maybe some cheese.  Or maybe no spaghetti!  The family just didn’t care for it.  I thought it might be a good Halloween sandwich- it looked like worms coming out.

‘But it looked so pretty!’

So the spaghetti pie iron sandwich was technically not a food flop, it wasn’t burnt, and did look pretty, but the family didn’t care for it.  If you improve the recipe so your family likes it, let me know, though it might take a few years before my family will try it again.

Even though my new campfire recipe experiment did not turn out, I was so glad I tried a sunrise picture.  I love sunrises, but don’t always get a picture.  Usually, I try to shower and all before getting the picture, and then I miss the sunrise!  This weekend, I was up early and just tossed on my clothes –I didn’t even brush my hair!

I quickly walked down to the beach and thought ‘Oh, it’s so light, I bet I missed it!’

2 geese flew in, so I went the rest of the way to the beach to watch and listen to them, before going back to the camper.

I’m so glad I stayed to see the geese!  After a few minutes, the sky was getting pinker.

I didn’t miss the sunrise after all!  It was so peaceful, pretty and quiet watching the sunrise on the beach.  What a great way to start the day!

Even though my new recipe didn’t turn out this weekend, we had fun experimenting over the campfire.  I also enjoyed the time with the family and my surprise sunrise.  It makes me wish I could camp all the time.  I hope you are able to enjoy time with your family or some fun surprises this weekend! 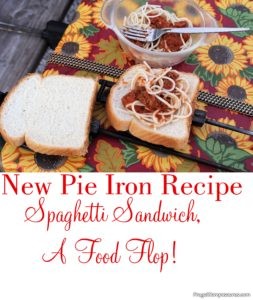