Good morning!  I am so glad to finally have chilly camping weather return.  The lazy days of summer are fun, but campfire experiments can be fun and tasty, even amusing for everyone around the campfire.

A few weeks ago, we enjoyed camping during a cooler weekend, while watching the August Perseid meteor shower.  I used the opportunity to try a few new camping recipes and experiments.   I have already shared my ‘new favorite’ camping supper with pie irons– an easy meal from planned leftovers.

Now, I’m going to share, how the youngest and I greatly amused the husband at snack time.  Even though I have a cute campfire popcorn popper that I enjoy, I have wanted to try ‘hobo popcorn’ again for a few years.  Hobo popcorn is popcorn made over a fire in an aluminum foil pouch, like a hobo knapsack.  It is soooo cute!  But last time I tried it, the oil leaked out and I only got a few burnt kernels of popcorn.  How sad.

This time, I was going to be very careful to fold and crimp the aluminum foil so the oil would not leak out.  As the youngest watched me, carefully fold it to make an envelope for the oil and popcorn, he decided to make his own version!

Instead of folding, he molded his foil over his fist to make a pocket for the oil and popcorn.  Very interesting.

Then, we both poked the popcorn pouches with marshmallows sticks, so we could hold them over the fire.  The poor husband did not think he would get any popcorn for a snack that afternoon.

Hmm, the husband does not need to always be right.  Soon, the youngest’s pouch fell off the marshmallow stick.

Thankfully, the tripod was set up, so we set his pouch on it over the fire.  But soon, we also were hearing sizzling and popping from both of our pouches!  How exciting!

I was soooo excited- my improved hobo pouch was working!  I could feel the kernels popping in the pouch as I held the marshmallow stick.  I think the pouch was even expanding!  How fun!

Then, I smelled a bit of burning.   Maybe it was time to open the popcorn pouch and see how much of the popcorn had popped?

As I moved the marshmallow stick and the popcorn pouch off the fire to have the husband help me, he laughed and said ‘it’s on fire!’

Sure enough, when I looked at the other side of the bag- there was a big hole with a fire inside!  No popcorn for an afternoon snack this way.

The youngest’s pouch was not working any better.  It was moved closer to the fire, then the oil started leaking out, and the popcorn was burned.  It was a fun attempt, but the fist-shaped popcorn pouch just didn’t work.

We put my burning ‘not’ improved hobo popcorn pouch in the fire grate to finish burning.  It was hilarious- the popcorn started popping out of the burning hole in the foil and going into the air!  It was not tasty, but very fun!

Since we actually were hungry for an afternoon snack, I thought I would try popcorn one more new way- with the cast iron skillet.  I had heard, on tv, that the best way to make popcorn was to first put oil and 3 kernels of popcorn into a cast iron pan.  So I did.

The husband thinks I need to measure when I cook, ‘It’ll be fine’ I tell him as I add ‘some’ oil to the pan, not half an inch but more than just covering the bottom of the pan.  Then I put the lid onto the cast iron pan set we use when we are camping.  We also have a cast iron dutch oven with legs that we use, but the Lodge set with the shallow skillet for a lid works great over the fire.

A few minutes after setting the pan, with oil and 3 kernels of corn, on the tripod over the fire, it was sizzling and then they popped!  I added the rest of the popcorn, maybe 1/3 of a cup, and placed the lid back on.

The cast iron pan was too heavy to shake while the popcorn was cooking, so I didn’t.  It was also hard to not lift the lid and check on the popcorn, so I didn’t.  Whenever I would check, and the popcorn would come flying out, the husband would say ‘leave it alone, that’s enough raccoon food on the ground’.  It was soo much fun!  It was even fun as I took pictures of the finished popcorn, and it went flying out of the pan!

And it was also sooo tasty!  With all the oil, I didn’t add any butter, only Lawry’s seasoning salt, and it was perfect!  It was not on fire, or burnt and it was edible.  Popcorn is the perfect afternoon camping snack if you have a campfire going, especially if you skip the amusing aluminum foil experiments and make the popcorn in the cast iron pan.   I hope you can enjoy some fun, tasty snacks the next time you are camping! 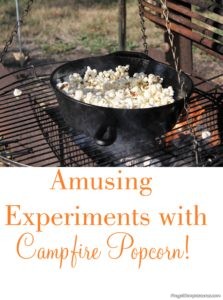