Good morning!  I am so excited!  I get to share another fun campfire recipe/experiment with you:   Pie Iron Cinnamon Rolls!

A few weeks ago, we had unnaturally cool weather.  In early August, I needed a flannel shirt, not just to keep mosquitoes away, but to keep warm!  That weekend, we were able to enjoy camping (without the air conditioner), campfires and many campfire recipes!  It was nice to want to sit next to the fire, and not complain about the heat or wish for a fan.

I have already shared a few of the recipes from that weekend, Pie Iron Planned Leftover Meals and Amusing Campfire Popcorn Experiments.  Now, I’d like to share our sweet treat breakfast from a pie iron and the interesting marshmallow stick variation!

Like the campfire popcorn, I tried this recipe a few different ways on the same day.  I enjoy playing and experimenting over the campfire, but I’m not sure the husband feels the same way. I probably drove him crazy with new campfire recipes, but it had been sooo long since I could enjoy being around and experimenting with a campfire.   Maybe trying 3 recipes with 2-3 variations each in 1 day was a bit excessive?

Thankfully, all the recipes had some successful, yummy parts and none of the recipes were a total food flop. The husband thinks I should try new recipes at home and then do only the successful ones camping.  But I love experimenting over the fire, not the kitchen stove.  If I experiment at home, it would be easier because I could haul less stuff when we go camping, but I’m not going to tell the husband that he might be right again!  And new recipes are a great excuse to keep the campfire going all day!

If I only took successful recipes camping, I couldn’t share the amusing experiments or the interesting-almost food flops with you.  I enjoy trying all the recipes variations, even the ones that fail or almost fail.  If I share all my tries, you might come up with a different variation that your family really enjoys- or you might decide to never make 3 day leftover cinnamon rolls while on vacation!

It was so fun and so easy making the cinnamon rolls!  It is sooo easy, there really isn’t a recipe.

extra flour, dough can be sticky

Butter, to melt in pie irons so dough doesn’t stick

I used Bucket of Bread for the dough, it was mixed and ready in the refrigerator, so all I had to do was grab the bucket.  How easy!  A refrigerator tube of croissants or biscuits or even thawed frozen dinner roll dough would also probably work.  I love bucket of bread though, because it can be mixed ahead of time and stay in the refrigerator up to 10 days.  It does get a sour dough taste the longer it keeps.  My family doesn’t like the sour dough taste, so I try to use it (or make frozen rolls) in 5 days.

For both variations, I sprinkled flour on the dough so I could easily handle the sticky dough.  I need to take out a walnut size piece of the dough and flatten it to a long rectangle.

After sprinkling with brown sugar/cinnamon, then I folded it in half the long way, like a brown sugar sandwich-mmmm.

For the glaze, I had brought plain powdered sugar in a jelly jar.  It was very easy to add a bit of milk and stir.  Definitely add only a small amount of milk to start, you can always add more.  It is amazing how quickly milk  can dissolve powdered sugar!

The twirled cinnamon roll looks sooo pretty, with its toasty, melted brown sugar/cinnamon and powdered sugar glaze.  Unfortunately, it was also smokey flavored from the campfire.  The smoke taste did not seem right with the cinnamon roll taste.  It was easy and fun to cook, and maybe others will like it, but my family just didn’t care for the smoked cinnamon roll flavor.  How sad.  At least there was another variation of the recipe to try!

Just like the marshmallow stick roll, I flattened a rectangle of dough and made a brown sugar/cinnamon sandwich for the pie iron cinnamon roll.  This time, I melted butter in both sides of the pie iron so the dough wouldn’t stick.  We like the cast iron pie irons, they are durable, especially in the high heat of a campfire.  It is easy to clean and re-season them, when needed.

Instead of twirling the dough, I rolled it like an individual cinnamon roll.  Then, I flattened and squished it down into the buttered pie iron.  Just like the marshmallow stick cinnamon roll, this one was hard to cook slowly.  It didn’t take forever, but I did want it to be done in the middle and not raw.

I was amazed at how well the cinnamon roll puffed up and  filled out the pie iron!  It looked so toasty and golden brown, when it was done!

It was hard to wait for it to cool down so we could sample it.  It smelled so yummy and cinnamon-y, I wasn’t sure if it also smelled smokey- with the campfire everything smells smokey!  Hopefully, it wouldn’t taste smokey too.

After putting  the powdered sugar glaze on, it looked as pretty as the other, twirled marshmallow stick cinnamon roll.  The one we didn’t like.

I was so happy that this one did not taste smokey from the campfire!  It was yummy, and since I only made one, very hard to share with the family.  It really wasn’t too hard to share, but I did wish I had made more of the pie iron cinnamon rolls.

I’m so glad that I was able to experiment over the campfire in the cooler weather and share the results with you.  Even though the marshmallow stick cinnamon rolls didn’t turn out for us, the pie iron one was great!  It will be easy to bring Bucket of Bread and the few other ingredients with us camping, so I can make a sweet treat breakfast over the campfire! 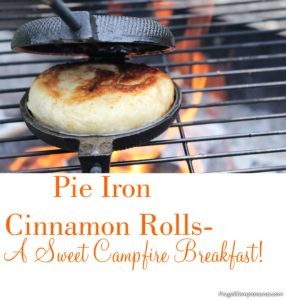 Happy Camping (or experimenting over the campfire!)