Yes, definitely!  You might not think of caves or barges when you think of Iowa, but we had a nice, relaxing end-of-the summer vacation in eastern Iowa that included both.  A few years ago, we drove down The Great River Road along the Mississippi River, from Pike’s Peak in the northeast corner of Iowa, to Bellevue, south of Dubuque, in the east central part of Iowa.  We intended to drive a few hours every day, find a camp spot for one night and then explore the area.   In reality, it was rather hilly and we discovered that we don’t like setting up camp every single day.  So we ended up using Bellevue State Park as a base camp and exploring north and south from there.  We enjoyed it so much, that we went back again this year!

The caves aren’t in Bellevue, but they are close.  Maquoketa Caves State Park is only 24 miles south west of Bellevue, which makes it only 35 miles from the Mississippi River.  If you are traveling the Great River Road, or just live with-in driving distance, it is a great state park to visit that really is different from most regions in Iowa.

I am used to corn and soybean fields.  Very flat corn and soybean fields, so the husband was probably tired of the many times I repeated “This is soo much different than our Iowa”  or “ How do they farm on the hills?”  or even “Won’t the tractor roll over?”  Actually his eyes could have been rolling, but I wasn’t watching.  I was watching the pretty wild flowers along the roads and the pretty rolling hills as he drove to Maquoketa Caves State Park.

We decided to leave for vacation on a Monday because we didn’t want to reserve a site at the state park.  (love to save money!)  Iowa state campgrounds are part reserve online (with an online extra fee) and part first come/first serve, with the percentage at each park being different.

It is easier to get a non-reserve site during the week, as other campers head out.  Usually it is easier.  We pulled in mid-afternoon and were very surprised to see the campground very full.  It is a smaller campground with 29 sites, 17 of which are electric. Many of these sites would be perfect for tents, pop-up campers and smaller campers.  The husband was easily able to drive our 36 foot 5th wheel through the campground and around the cul-de-sac at the end with plenty of room, but there were only four open spots.  Luckily, our camper fit in one perfectly.  The others would have been a tighter fit, but doable.

I wonder if there are quite a few people that show up like we did, because the park brochure did mention that most nearby cities have municipal campgrounds.  Bellevue State Park was our ‘back up’ campground because it is so close.  On Tuesday, we saw another larger camper drive in and visit with a ranger.  The ranger told him there was not something special going on, but it is usually fairly full at the campground.  He ended up leaving.   So, be aware that you may want a back-up plan if you choose to not reserve.

Also, you may want to be aware that the back entrance from highway E17,  that is technically closer to the campground has two miles of gravel going to the entrance.  Not so much fun when you are ‘trusting’ the GPS voice, the navigator is not really paying attention to the map and the truck is freshly washed.  At least the gravel was packed down and nothing got too dusty.

We did have a small hick-up after we set up.  A 110v light was flickering when the air conditioner would come on.  We turned on a different light, to make sure it wasn’t the bulb.  Of course it wasn’t.  The husband switched from 30 amp to 20 amp service (no 50 amp in the park), and it was fine!  At least the camper was fine; the 30 amp breaker was not.  Since it was evening, he switched the refrigerator and water heater to gas so we were able to run the air conditioning and fans overnight.  In the morning, we told the rangers (who drive through often) and they changed it right away.

Tuesday we were finally ready to go see the caves.  You have to listen to a 5 minute talk about bats and the White Nose Syndrome.   People can’t catch it, but they can spread it from cave to cave and it can kill the bats by waking them up in the winter, then they either freeze or starve.

The caves are open again, (they were closed for a few years around 2012) but do close yearly in mid-October for hibernation season so be sure to check the Iowa DNR website for exact dates.

Thankfully it is a short talk, they may have also shown pictures but I was busy examining my shoes.  And the sidewalk.   And the wildflowers.  Hopefully, the ranger did not think I was being rude, but I really don’t care for bats.  The husband says it is more than just not caring for bats, he doesn’t think everyone sits outside on the curb crying after seeing a bat in church.  But he did sit next to me.   I was a bit concerned about bats in the caves, but the ranger was very nice when I later asked about it, guess they sleep in trees during the day.  If I saw anything, it would be a small bird like a barn swallow.   Perfect, that’s all I see anyway-night birds, though sometimes I have to repeat it to myself a few times to sound more convincing.

Once we completed the talk and received a pretty green bracelet, we were ready for hiking.  Maquoketa has 6 miles of hiking trails and 14 caves.  There are definitely different levels of hiking and cave exploring.  We saw people covered in mud with lighted helmets and families with little children and grandparents, so you will be able to pick a level that suits you.  We picked caves that my tennis elbow and ungracefulness and the husband’s knees would allow.

We started our exploring with Middle Dancehall Cave entrance, and then went north under the road to 7 of the caves.  As you can see, there are some stairs, but they had a nice sturdy railing.  While I enjoyed the easy stairs, the husband and youngest boy followed a side path off the stairs.  They had fun peeking through a ‘window’ in the wall face, though they had to walk crunched over to get there.

Dancehall Cave is my favorite.  It was so cool compared to the very hot and humid day that I wanted to bring a book and lawnchair and just relax there.  Our youngest was more interested in finding explorable caves that did not have lightbulbs and a paved sidewalk, like Dugout Cave and Twin Arch Cave.  As an older campasaurus, I liked the path, though it was wet in a few places and I had to hunch over to get through.  There was no crawling here, so I was able to watch for small stalactites, maybe flowstone and maybe the beginnings of cave bacon!  It was fun, there were even some places in Dancehall that the youngest enjoyed climbing into.

North of Dancehall Cave, the trails were a little more rugged, but still fine.  I did not go on all of the trails or in all the caves, but there were still plenty of choices.  Near the path is a natural rock bridge that is almost 50 feet above the creek, we walked under it and then alongside it on a higher path.  The boys enjoyed hiking ahead and exploring some of the smaller caves.  Some of the caves were shallow and some are walk through, but we had plenty to explore for 2 hours without getting exhausted!

In the next post, I will tell you about more non-exhausting cave exploring at Maquoketa and hopefully we will get to talk about barges! 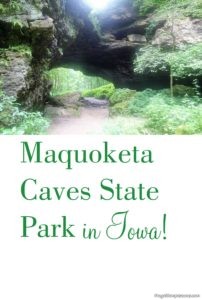