Good morning!   As I watched the weather forecast for the week, 90 degrees and humid all week, I am looking forward to fall.  I enjoy summer:  having the kids home all day and the laid back, relaxed schedule, but not the heat.  I know some people like the heat and it is great for my tomatoes and sweet corn, but it’s just not great for me.  I don’t even like camping in the extreme heat.  It’s very hard to enjoy a campfire when it is 90 degrees.  At least this summer, we have enjoyed some early morning campfires and canoe rides before the heat of the day would start.

Besides camping more often and enjoying a campfire in the chilly fall weather, there is another reason I can’t wait for fall- Cruise through the Woods!

In September/October, cars from around Iowa and nearby states gather for a car show.  It is fun to see all the classic cars; they had almost 1400 participate in 2016.   Some of the cars will go straight to the car show, while others will meet in Stratford, Iowa by traveling on one of the 10 routes that start in different parts of Iowa and some bordering states.  Then the cars cruise through a few parks on their way to the show in Fort Dodge, approximately 30 miles away.   Many people will park along the route and view the cars cruising by.

While we don’t own a classic car (pretty sure the ones with fins that I like would not pull the 5th wheel) we have enjoyed traveling to the show to see the cars.  The last few years, we have parked and enjoyed breakfast while the cars cruise on by.

While I grew up picnicking, he did not, and we usually only picnic on long vacations.  So, I was very excited when he agreed to a picnic breakfast!

It was such a fun morning.  We were not there early enough for the sunrise, but did see the steam on the river.  Coffee was again in the thermos, and we cooked bacon, fried potatoes, eggs and toast on a griddle over the old green Coleman stove.  I love the old Coleman stove.  We have used it on all of our longer vacations and often when we are camping.  The newer ones, like this one, look very similar and I think the dual fuel option would be nice, but I won’t get rid of the old green one.  It is even older than I am; my mother-in-law bought it with green stamps.

Even though it is older and a bit rough looking, it still works great.  The husband bought a pump repair kit, but we store the kit in the camper, since he has not needed to repair the stove yet.

The Coleman stove is smaller, easier and less messy than the grill to take in a vehicle.  It has been fun cooking with it at different longer vacations, like in Custer State Park, South Dakota, along the North Shore Scenic Drive in Minnesota and even at our Cruise through the Woods breakfast picnic in Iowa.   Well, I say it has been fun- the husband has done most of the cooking while I corral the children.  Since they are getting older now and probably don’t need (or want) me to hold their hand so they don’t fall in the _______(lake, river, Badlands….I worry about it all) , I will need to start cooking.  Someday.   Maybe.

Actually, the husband is good at cooking outside and we like to do most things together, so we cook together too.  This morning, we cooked bacon, fried potatoes and eggs on the old green Coleman stove.  We used the griddle from an old grill.  We liked the griddle so much, that when we sold the grill, we kept the griddle.  It fits fine on our new grill as well as on the Coleman stove.  It is Teflon, which I don’t have much luck with, but the husband doesn’t turn up the heat as high as I do, so the Teflon has lasted nicely.  We store it in an old pillowcase so it doesn’t get scratched, and the Snoopy characters on the pillowcase remind me of the kids and make me smile.

It was really fun to get to the park early for our picnic breakfast.  We had time to watch the steam on the river, look for eagles and pick our spot before the crowds pulled in to park.  I thought about having a fire, but it was just chilly- not cold, and the old green Coleman stove worked great to cook breakfast.

Even though we enjoyed cooking, having breakfast and watching the cars cruise by together, we do not share the same taste in cars.  I try to be mindful of the neighbors (who knows what they like) and I wouldn’t want them to feel bad, but I love teasing him, because we like such different cars.

This fall, when the weather turns chilly and we enjoy our picnic breakfast, I hope to take a few pictures of the cars as they go cruising by and not just pictures of breakfast.  Though we probably wouldn’t even agree on which car picture is the best; my vote would include fins, his would not.  I would also like to make coffee on the Coleman stove, there is never enough coffee, though I’m pretty sure I won’t get there early enough to enjoy the sunrise.  Oh well, it is such a fun, frugal morning even if we are not camping. 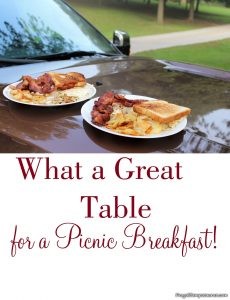 I hope you find special events to enjoy together, even just an early morning outside breakfast can make the weekend fun.