Good morning!  I can’t believe it’s been 1 year since we cancelled cable and installed the giant death ray on the screen porch roof.  At least, I think it looks like a giant death ray, the husband says it looks like a TV antennae mounted on the screen porch.   I might have watched too many science fiction movies in high school.  Of course that was before our rural town had cable, so the movies were on broadcast TV.

We had discussed cancelling the cable for a few years, but we were worried before we actually did it.  Since we live in a rural area, far from the stations, I was unsure if we would even get broadcast TV.  As a little girl, I remember my aunt who lived in rural Minnesota sometimes not getting any TV stations.  It would be scary to not be able to watch local news channels when the weather gets bad and storms are headed towards us.  Of course, the kids all say ‘just check the internet.’

In fact, that’s one reason we actually did cancel the cable.  They watch the internet instead of the TV.  There are very few shows that the kids watched on cable channels.  They watch YouTube videos or play video games instead.  Once in a while, they will even read a book- thank goodness.  (Really, they are good readers and do read often, it is just more dramatic and fun to say it the other way and tease them.)  The youngest stayed up to 4 am last night to finish a book, luckily, he can sleep late during the summer.

The husband and I had a few shows we would watch (did any one hit the mother lode in the Klondike yet?), but after the cable company raised  the rates again, it seemed silly to pay so much for a few shows.  While it’s nice to relax and have down time, many nights it seemed like we were flipping channels and not doing anything else.

The husband researched antennas suitable for our distance from the stations.  There is a lot of research and recommendations online.  It was nice that the research included distances and suggestions.   Make sure to check prices if you buy an antennae, we were able to get our antennae at a local store for close to the same price as online.  I thought if we needed to return it, a local store would work better.  I’m not sure we could have fit it back in the skinny box to return though, so I’m glad it works so well.

The box seemed surprisingly small, it was about 6 foot tall and skinny.   But as the husband folded out the antennae, it just grew and grew!  Some of the YouTube videos really helped with unfolding and assembling the antennae, so I’m glad we watched them first.

Once it was unfolded, assembled and installed on the screen porch roof, I was amazed!  First, I know we were very careful,but I was still amazed that the sharp thin metal parts did not get bent or spear anybody. Then, since our house is a few hours drive from the stations and the antennae is behind a tree, I  was also amazed with the great signal.  All, except one, of the local stations came in fine.

We bought a $20 power booster a few weeks later in an attempt to receive the last station, but no such luck.  That’s ok, we have plenty of choices with all the digital versions of the channels.   After a few weeks of adjusting to broadcast TV, we were fine.   Some of the shows are older, but that is ok too.  The kids have discovered that they like the westerns,  black and white sitcoms and even a few of my campy science fiction movies.

Besides saving money and enjoying the older shows together, there is another reason I love the antennae:  it has boosted our math skills and family time.

Sometimes, there really is nothing to watch on tv.   Instead of paying for cable and flipping through 200 plus channels repeatedly, we flip through our 20 free channels and turn off the tv.  Quite often, we will play a board game, cards or cribbage together.

I grew up playing cards and board games with my siblings, so I love playing with my family now also.  It is something that we usually only did in the camper, when it was rainy or too hot to be outside.   Since the youngest learned 500 Rummy when we were camping at Bellevue, we have been playing cards.  It is great math practice for the youngest (and for me), as we try to race to 500 points.  Though I don’t like it when they go out  and I have a ton of cards in my hand, then I must subtract the points.  I’m really sure they try to do it on purpose!

We also enjoy adding to 500 in Farkle.  Farkle is a great camping game, many people can play and the dice don’t blow away like cards will when you are playing outside.  Now, when there is nothing on tv to watch, we can play games like this at home too.

A game we have learned, since getting the antennae, is cribbage.  Growing up, I played cards and board games, but my siblings and I also watched our grandfather and mother play cribbage.   We loved the carved cribbage board he had brought back from Alaska, but we never learned how to play.  I was very glad when we learned how to play cribbage together as a family.  I’m not sure if we play it right yet, but that’s ok.  It is a fun way to spend time with the family and practice addition skills.

There are many benefits to cancelling cable and installing an antennae.   We save tons of money, the antennae cost the same as one month of our cable subscription.  So we have been watching tv for free for 11 months!   We also waste less time flipping channels and the kids have learned to enjoy the older, vintage tv shows.   My favorite benefit, though, is that we turn off the tv way more frequently and practice our math skills together while playing cards, cribbage and games as a family. 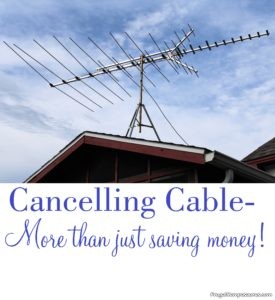 If you are trying to save money, I hope you will try cancelling cable tv.  You really can save lots of money while getting great reception with an antennae.  Since I wanted to be frugal, I was surprised by the many other benefits that we are now enjoying.