Good morning!  Sometimes to be frugal, you need to be brave.  Not super brave-like hiking all alone in bear country without warning bells, but just a little brave.  Stepping a little out of your comfort zone, can help you be frugal and even improve your attitude.

Today, I was brave!  Well, just a little.  But I did step out of my comfort zone and now I have free firewood for camping or making maple syrup!

This morning, I was in a mood.  I was going over the budget and paying bills.  This year, I’m refocusing my frugal efforts to finish paying off debt.

I am pretty frugal already.  I don’t shop, not even thrift stores right now.  I menu plan and am actually following the menu.  I line dry our clothes or use a drying rack in the winter, though with the nice breeze and 45 degree weather today, the sheets are outside drying.

But, I was in a mood, because one bill is almost paid off!  There are only 4 month left on the bill and I would love to pay it off early!  But I can’t seem to squeeze any more money from the budget.  Now I know it will be paid off soon, and I should just be patient.  But being patient is soooo hard!  So, I was in a mood- trying to find extra money for the debt, wishing it was paid off now.

Staring out the window, thinking of ways to make extra money since I can’t find any extra in the budget, I saw 3 big trucks drive by.  Tree trimming trucks.  They set up to trim trees at the park, near some electric wires.  I watched them set out cones and raise the bucket:  soon small branches started falling.  Then larger branches were falling, ones large enough to split  for firewood.

‘Oh, I wish the husband was home-I could make him ask the trimmers if they would leave the large branches for firewood,’ I thought to myself.

‘Oh!’  It occurred to me that I could ask them.  I didn’t have to miss the opportunity because the husband was working.

I quickly slipped on shoes and a coat and left the house, before I lost my nerve and changed my mind about asking the tree trimmers for branches.

For many people, this would be easy.  But I am the one who waited a year to even call a local restaurant distribution company.  I had been told they accepted walk-in customers, but was too chicken to ask.  Asking the tree trimmers for branches was definitely out of my comfort zone!

Thankfully, one of the city workers was at the park:  I knew him.  I could ask him first and work my way up to asking the tree trimmers.  I asked the city worker about the wood, to make sure he didn’t want it.  He didn’t.  He also didn’t think it would hurt to ask the tree workers.

I winced as I walked up to them; they were putting a perfect large branch into the shredder.  Good thing I didn’t wait for the husband to ask them, the branches would have been all gone!

‘Do you want a few for decorations?’  That was the very nice response I received, when I asked for branches to be set aside.

‘No,’ I replied.  ‘We camp, and if you will just leave the large ones, we will make sure to get them tonight.’

He smiled back and gave me a thumb’s up!  It was very loud near the shredder, and I hoped he understood.  At least he was very nice, and didn’t mind at all that I had bothered him.

I felt relieved, as I walked back to the house.  That wasn’t sooo hard after all (well, maybe a bit).  But I had survived!  Just like asking the local restaurant distributor, I only had to be brave and ask.  It was not rude to politely ask.  The worst that would happen is that they said ‘No, they weren’t allowed to save branches’.

I walked over later, when they were gone, to check on the branches.  They had left a very nice pile, and had even stacked it neatly by a tree.

Many people wouldn’t think twice about asking.  It would not bother them.  For me though, it is a huge step out of my comfort zone.  I am glad I was brave:  now I have a nice stack of firewood- ready for the log splitter!

Asking for free firewood doesn’t make any money and it won’t pay off debt faster, but it did help improve my mood.   It was great to do something to save money, and being outside in the warmer weather was nice.  Next fall or summer, I wouldn’t be searching for campfire wood either! 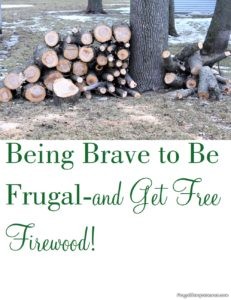 I am hoping that the more I try being brave, the easier it will get.   Even though it is hard, stepping out of my comfort zone can help me to be frugal.  Thankfully even small efforts, like asking for free firewood, encourage me to continue being frugal and improve my mood.  I hope you can find a way to be brave today, to step out of your comfort zone and encourage frugality!