Good morning!  It’s still auction season here and I’ve already shared some of our auction tips and fun adventures with you.  Going to auctions can be frugal entertainment, especially when you have a list of items you want to bid on, have a price limit you want to spend and if you can stay away from bidding wars.  Later in the post I’ll share some of my experiences bidding (usually the husband bids), and some of our frugal finds, but 1st I would like to share a few times when you don’t want to be frugal at an auction.

Our local firemen have a fundraising auction in the spring.  It is their main fundraiser for the year and we enjoy going, when we can, to support the firemen.  It’s not a frugal activity, but when I am prepared and budget for the auction, it can be lots of fun.  Sometimes, we just enjoy watching friends and neighbors outbid each other.  The auctioneers can also really encourage the Iowa State and Iowa College fans to outbid each other on team items.  Which fans will bid the most?  It changes from year to year, but there is always good natured competition for the high bid.

One year at the auction, we bid and won some pork roasts and bacon, a person sitting nearby said we did not really get a bargain.  That was not the point of the evening though, there is a time to be frugal and a time to support groups. 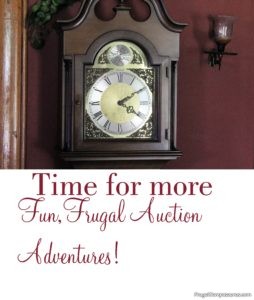 Similar to the firemen, our church has a fall auction, with the money raised split between different missions.  This is usually a tasty auction, since most of the items to bid on are food.  A $40 jar of rhubarb jam is not a frugal purchase, but definitely yummy especially when the money goes to a good cause.

These kinds of auctions can be a great way to have fun and support local groups, many will advertise in the newspaper.  You could not only support your hometown groups, but even go to other surrounding communities to support great causes and groups.

At most auctions, we are not trying to support great causes, but trying to find great deals.  There are always interesting items at the auctions, but we have learned to make lists of what we want and how much we will spend.  Otherwise, it is very easy to take home lots of things you really don’t need, just because it was cheap.

Thankfully, we have tried to limit bringing home extras, but sometimes you just can’t help it.  We have a large security flashlight that was only $2, a $2 wooden Bible case and stand and a $3 cool carved wooden eagle.  All items that no one else wanted, and ones we gave a home.

Sometimes, unwanted items are thrown in with items you do want.  I wanted gloves and a glove holder for a Christmas dress up box. I also got an iron, a small propane torch and many magnetic bracelets.  All for less than $5, at least the iron works.  Those items were at the farm auction, so I had to keep lugging the box along with me, as I followed the auctioneer.  It was harder when I had to lug the 2 baskets of mason jars I bought also.

Thankfully, the second auctioneer, that the husband had followed, stopped for a while.  This gave the husband a chance to take things to the truck.  I really don’t like it at bigger auctions when they have 2 auctioneers.  We almost always want something from each one, so I have to split from the husband, follow a different auctioneer and bid myself.  I don’t like to bid; I would rather just elbow the husband if I want something.

Oh course, it is possible for me to accidentally bid even when I am with the husband.  The farm auction had 2 beautiful grandmother clocks, a little smaller than grandfather clocks, which we thought would fit perfectly in the living room.  The gentlemen had fixed clocks as a hobby, so his family had plenty of them and did not want these two.  The one we liked was also the one they knew had been working recently.  How lucky!  I made sure to ask, though most auctions are ‘as is, buyers beware’.

We made sure to be towards the front of the crowded garage when it was time to bid on the clocks.  We were ready and had set our price at $150, rather low but they also had a beautiful dining room table I liked.

Shaking your head at an auction can be dangerous, but the auctioneer or his helper will usually make eye contact and repeat the price like a question.

Unfortunately, if the helper is right next to you   and

is really loud    and

everyone else is really quiet     and

if you are not sure of the price    and

if you are not used to bidding-

It can be scary!  I felt like the deer in the headlights!

I’m sure my eyes were as big as saucers as I turned pale, panicked and just agreed.  I didn’t care what the price was (I know, not frugal), as long as he wasn’t yelling “Yup?” right at me, “Yup?” right next to me.  I’m also sure I moved to behind the husband and let him finish bidding on the clock.

Thankfully, it only started at $45 and we bought it for less than $100.  I could not wait to get out of that garage though.

When I calmed down, I was very excited to have the clock.  It is so pretty.  Since we knew we were interested in the clock, researching how to move it would have been a good idea.  We did have old blankets to set it on, but we had to lay it down.  Luckily the husband took out the pendulum, which is a delicate part.  The weights should have also been removed, but it survived and now chimes prettily in the living room.

We were also lucky enough to get a glass Aladdin lamp with shade for about $15.  The shade and wire shade holder costs $45, so it was a great deal.  We had purchased a silver Aladdin lamp for $20 at a previous auction and after researching it, I now watch for more lamps at great prices.  The Aladdin lamps are fun to use, it’s hard to believe how bright they are- they really do need the shade.  I’m hoping  to find just the shade and wire shade holder for the silver lamp soon.

We were not so lucky when the Griswold cast iron pans were auctioned.  I love to cook with cast iron and also use it camping.  The older pans can have such a nice smooth finish; we love to watch auctions and garage sales for them. When the older man brought a chair and plopped right in front of the cast iron, we knew we were in trouble.  The husband didn’t even get to bid on any of the cast iron pans; sometimes the prices are just too high.  You never know with an auction, of course that is part of the fun though it can be disappointing. 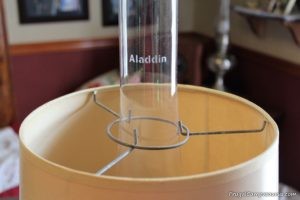 It is fun watching the people and the prices that items go for at auctions; it can even be great frugal entertainment, especially if you have a list and decide on price limits before the bidding starts.  It is also a fun way to support local causes and groups.