Good morning!  I’m so excited to be finishing planting the garden today.  I know it’s late, but for me the end of May is normal, so I’m not toooo late.  I enjoy the garden, but it seems there is always so much to do and the garden is such a big project, that I put it off as much as I can.

I’m just happy to be finishing today.  The potatoes are the last to get planted.  The husband chuckled at me the other day and said “You mean, the first thing you are supposed to plant is going in the garden last?”  Well, I guess so, but it’s ok.  They still have plenty of time to grow.

This will be the second year I’ve planted potatoes in the tomato cages.  Last year, it worked awesome!  Way better than my first 2 attempts at conserving space with potatoes.

I’m trying to save space gardening since the husband, who tills the garden, won’t make it bigger.  Some year, I will learn to weed and pick produce every day, then a bigger garden will make sense.  Until then, I will experiment with ways to conserve space and use gigantico cucumbers.

My 1st attempt was potatoes in a garbage can.  A great idea:  plant them in the bottom, add dirt as the potatoes grow and dump out a huge mound of potatoes in the fall.  Unfortunately, I didn’t think to add drain holes and then wondered why my potatoes didn’t grow-too much moisture.

My 2nd attempt was very similar: drainage holes, few rocks in bottom so the soil wouldn’t plug drain holes, dirt, potatoes, dirt.   I even placed it by the shed so I could watch it grow and add dirt and water when needed.  Unfortunately, I didn’t notice it was by the shed under the gutterless eves.  It took me ½ the summer to figure out why it never needed water and why the potatoes rotted.  It’s a good thing we don’t depend on the garden for all of our food.

Last year was my 3rd attempt at saving space planting potatoes.  I only planted 3 hills since I had not had luck with attempts 1 or 2.

Wow!  I wish I had planted more!  It worked great and I can’t wait to plant more potatoes this year!

I tried the same concept as the garbage can:  dirt, potatoes, dirt, growth, more dirt.  But I used tomato cages and newsprint.  Being frugal and not trusting my luck, I used free newsprint instead of the bought burlap I had seen in a picture.

I folded the newsprint in half the long way, and lined the tomato cages with it.  Then, I added a few inches of dirt and seed potatoes ( or growing potatoes from last year).  I covered them with more dirt or grass clippings.   It was easy to add dirt to cover the potatoes as they grew.

It was also easy to add higher layers of newsprint as the summer continued and the potatoes kept growing, making sure to overlap the layers of newsprint, so dirt doesn’t spill out.   In the fall, it was even easier to lift the tomato cage off the pile and find the potatoes.  It’s like looking for buried treasure!  We had our own garden potatoes at Thanksgiving time and Christmas, how fun!

My 2nd attempt used extra sections of deck railing tied together with crochet thread.  Maybe the crochet thread should stay in the sewing room.  It broke and I ended up propping the railing together.  It was nice grow the peas/pole beans/cucumbers up and over the railing though, much easier to find and pick them.

This year, the husband helped with the garden and drilled holes into the railings.  Then, he just bent some thin fence poles we already had to hold the A-frame railings together.  I’m fairly certain that his solution will last longer than the crochet thread, and we will be able to easily take them down in the fall.

I’m so excited to be finished planting the garden.  The beans and cucumbers are just starting to break the soil and I can’t wait to add more dirt to the potato cages.  I hope they do as well as last year.  After my failed attempts,  I was so surprised to move the tomato cages and see actual potatoes last fall.  I really enjoy watching the garden grow, too bad weeding isn’t this much fun. Hmmm, I wonder if the husband would notice zucchini plants by the shed?

Let us know if you conserve space in your garden.  Maybe  the garbage can potatoes work well for you, or maybe you have a different idea for me to try? 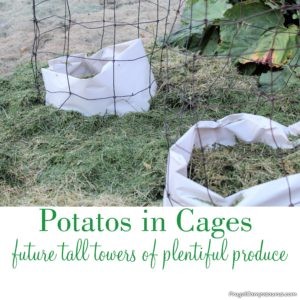