Frugal Fun?  Fun Frugal?  Good morning!  I know the new Summer Series:  Friday Challenge is supposed to be Fun or Frugal every Friday, but this week I couldn’t decide.

It is Fun, because I love experimenting and cooking with the kids.  It is also Frugal; ½ gallons of milk were on sale for 69 cents this week!  So, it will be a Fun and Frugal Friday.

Farmers cheese is a very easy cheese to make at home.  I like that you can use store bought milk, as long as it’s not ultra-pasteurized milk.  I used whole milk, since I’ve read it makes a creamier cheese than 1% or 2% milk.

I also like that I don’t have to worry about using rennet or aging the cheese properly.  Farmers cheese is a fresh cheese and should be used within a week.

We’ve made this easy cheese once before.  It was amazing watching it change and separate into curds and whey with just a little cooking and lemon juice or vinegar.  But I have always wanted to try making it again, since it was very bland last time.  This time I added much more seasoning. 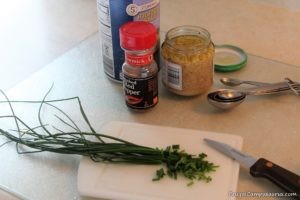 For the seasoned spread, I added 1 teaspoon of minced garlic, 1 teaspoon of crushed red pepper, 2-3 Tablespoons of chopped chives and salt and pepper after it was strained and divided in half. 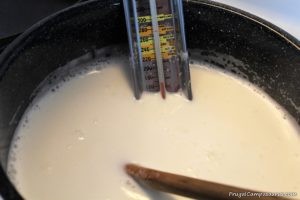 I made 1 gallon of whole milk into quark (I love the German name for it). In a large pot, I slowly brought it to almost a boil, 165-180 degrees.  Stirring is important, to prevent scorching the milk. 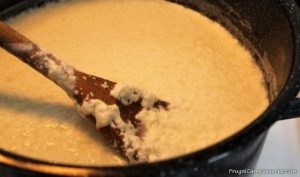 After it reaches the correct temperature, turn off the heat.  Slowly add lemon juice or vinegar, 1 Tablespoon at a time, gently stirring after each addition.  It will curdle, and separate into curds and whey.  I added 6-7 Tablespoons into 1 gallon of milk.  I read 4-5 Tablespoons might be used for a half gallon.  It is fun, watching it change and separate- the kids even came in to see it!   Since they are older, they don’t like to experiment with me as much, so that was nice. 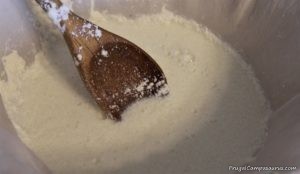 After it sits for 10-20 minutes, to help it separate, drain it through cheesecloth or a flour sack dishtowel.  I didn’t think it was draining as well as last time I made it and the curds looked smaller, so I added a big dash of lemon juice (?1 Tablespoon) to the pot. 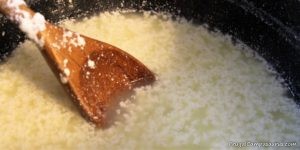 There was an immediate change in the curds when I stirred in the extra lemon juice.  They got bigger, the whey was lighter and it drained through the towel easier.  Guess I needed more lemon juice, but it worked out fine. 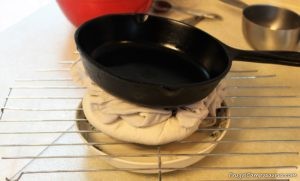 After it drained for 10-15 minutes, half of it was pressed for a firm cheese that I want to try frying. I twisted  the towel with the fromage blanc (love the French name too) in it and set a weight on it.  Cast iron is so useful. 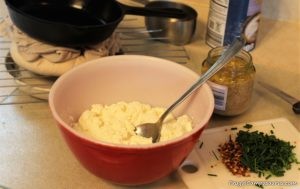 The other half was placed in a bowl for the seasoned spread.  After the seasonings were added, I chilled it in the refrigerator for a couple of hours.  It was a bit grainy, but after I stirred the chilled cheese, it was much smoother.

I am excited to try the fried farmers cheese this weekend, but we already like the seasoned cheese spread on crackers.  I might reduce the garlic to 1/2 teaspoon next time though, it is a bit strong.

I love that I can make my own cheese, even if it is a fresh cheese.  Farmers cheese is fun and easy to make,  I love watching it separate into the curds and whey. 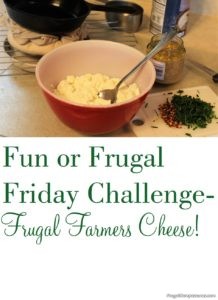 I am glad to start the new Fun or Frugal Friday Challenge, it has motivated me to re-try a recipe that I enjoyed making, but needed to spice up a bit.  Hopefully you will try making Quark (think I’ll stick to the German name) or re-try a recipe of your own this summer!